Orange Park, FL: KayCo Roofing LLC announced their 2020 “Shingles for Heroes” honoree! This is the second year KayCo Roofing has recognized a local hero and provided them with a free roof for their home. However, safety protocols put in place for Covid-19 created material shortages, which delayed the installation of the honoree’s roof. KayCo Roofing is proud to announce the 2020 winner. The “Shingles for Heroes” honoree, which has been previously announced through KayCo Roofing’s social media channels, was initially delayed because he was in transit from an overseas deployment.

Mr. Mikaele Anderson returned home from his fifth deployment to learn that his wife, Shannon, had nominated them KayCo Roofing’s 2020 “Shingles for Heroes” giveaway, and they were selected as 2020’s hero. When the KayCo Roofing team met with the Anderson Family, adhering to safe Covid19 guidelines, Shannon shared a funny story. We learned that Shannon had been waiting hours to know that Mikaele was back on US soil, which came in while Clark was on the other line telling Shannon they were the 2020 hero; she said it was like an answered prayer.

As a native to Flagler County, Mikaele began his naval career at Naval Air Station Jacksonville as a P3 aircraft aircrewman. For over a decade now, the Andersons’ have called the First Coast home as they raise their two boys. As a military family, they understand the sacrifices made both at home and away. However, no deployment could have ever prepared the family for the challenges they would face at home.

Two years ago, the Anderson family learned that their eldest son was diagnosed with an autoimmune disorder that causes cancerous spots throughout his body. After several deployments, treatments, and many hospital visits, they can now say that their son is cancer-free. During these challenges, many other needed responsibilities were put on hold. Within Shannon’s nomination letter, she also shared that the family purchased their first home; however, the home’s new roof, a selling point for the family, was installed incorrectly and caused their homeowner’s insurance to be denied.

The Anderson family is happy to be united together under the same roof, and one that will help them survive the seasons of life for many years to come. Mikaele was proud and honored to be named this year’s hero. He shared with the KayCo team that he is currently pursuing a degree to help military members with post-traumatic stress disorder (PTSD), which he plans to begin after his military career. Mikaele noted that assimilating into civilian life after serving our country is often a hard transition, and he looks forward to helping fellow military members.

Clark Briggs Jr, Owner of KayCo Roofing, had this to say about this year’s “Shingles for Heroes” experience. “[I feel like] Providing a roof for a family who makes sacrifices for our freedoms does not even compare to helping them with a new roof. They have gone through so much; they are the true heroes. Anderson family, thank you for your service!”

“It has been a privilege to conduct “Shingles for Heroes” to honor our local hometown heroes. We could have never guessed that 2020 would work out to be what we’ve experienced, but also reminded us of the brave individuals living in our community. I want to thank the community for their support, and we look forward to the opportunity to continue to serve our community’s roofing needs.”

As a local roofing company and an active member of the North Florida community, KayCo Roofing has been named among the “Best of Clay County” by the Clay Today and Folio Weekly, “Best of Jacksonville” by Folio Weekly, and “Best of Gainesville” by the Gainesville Sun. KayCo Roofing is a multiyear recipient for service and product excellence in overall System Selling performance for America’s number one most trusted and recognized roofing brand, Owens Corning. For more details about KayCo Roofing, visit kaycoroofing.com 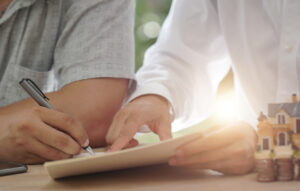